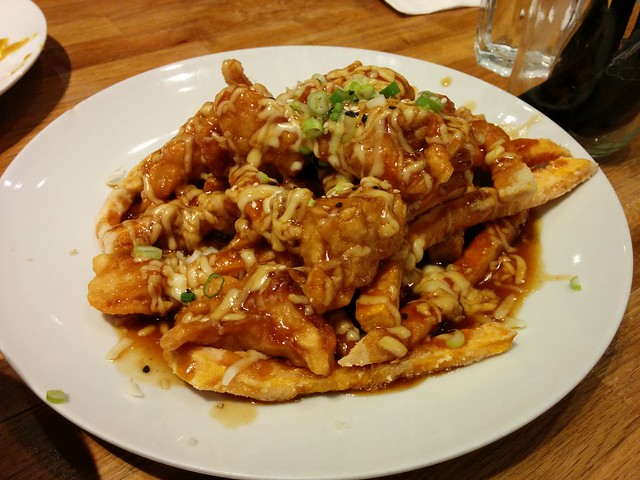 Sometimes cultural fusion poutines yield good results, as with Déli Sokołów’s smoked meat latke poutine. Most of the time, however, the results are just wrong. Case in point: the General Tao’s Poutine at NosThés Bistro.

For those of you unfamiliar with Chinese-Canadian cuisine, General Tao’s chicken is essentially the same thing that Americans call General Tso’s chicken. I think the only difference is that Americans serve it with broccoli. It was named after nineteenth-century General Zuo Zongtang from Hunan province, though he was apparently not a fan of deep-fried chicken. The dish does not really exist in China, but it should. Nobody really cares that it isn’t authentic because it is the perfect comfort food combo of crispy, spicy, sweet goodness.

NosThes’ take on the dish had some wonderfully light and crispy batter, but they amped up the sweetness  to sickly-sweet levels while simultaneously removing all chili that could have offset this. The sweet potato fries were good on their own, if a bit limp, but added even more sweetness to an already too-sweet dish. One of my dining partners said the different kinds of sweetness played off each other in an interesting way, but I wasn’t digging the interplay. It was just too fucking sweet. It could have worked as an oversized dessert, but it didn’t work as a meal.

Oh yeah, there was cheese on it too. Grated cheese is always a piss-poor substitute to cheese curds. Here, it just felt like a tasteless decorative afterthought. It had even less of an impact on the taste than the teaspoon of sliced spring onions on top of the poutine.

Verdict: A good choice if you’re in the mood for a big-ass greasy sickly-sweet dessert that will leave you feeling like crap; a poor choice if you want either General Tao chicken or poutine. Order tea with a bowl of vasir noodles instead.