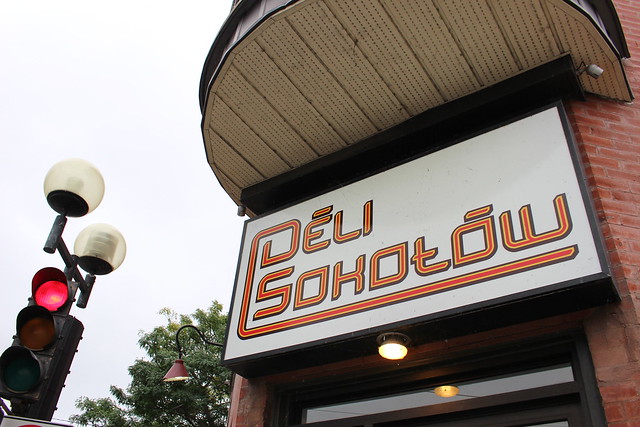 There’s a second-wave Jewish deli thing going on in Montreal these days.

The original wave dates from the first half of the twentieth century. With the mass migration of Jews from Central and Eastern Europe, Yiddish became Montreal’s third language This period gave us two iconic Montreal dishes. First, the local take on the bagel: sweeter, chewier, eggier, and tastier than the New York version available in most of North America. The second dish is smoked meat brisket, a local take on pastrami, but less sweet, with more pepper, also better. Some institutions survive from that period, namely Fairmount Bagel; Schwartz’s Hebrew Delicatessen; Wilensky’s; and a slew of others. Some have disappeared, like the iconic Bens, which, even if I miss it more than any other restaurant in this city, had lots more going in terms of atmosphere than quality of food. Many Jews left the city in the second half of the twentieth century, and Toronto became Canada’s Jewish capital.

The deli seemed on the way out, but has since experienced a nostalgic revival of sorts with the rise of hipster-foodie culture. The opening of New York’s Mile End deli in 2010 put Montreal Jewish cuisine in the international spotlight. Since then, a new generation of Montreal Jews has been redefining the old classics at great places like Hof Kelsten bakery, Fletchers’ Café, and the annoyingly popular Arthurs Nosh Bar with its New-York-City-style line-ups (to which I say “Fuck this, I’m going elsewhere”).

Déli Sokołów is a Jewish-Polish place that owns many of the old 1950s formica tables from Bens, though its poky interior lacks the open light-filled charm of its streamline moderne predecessor. 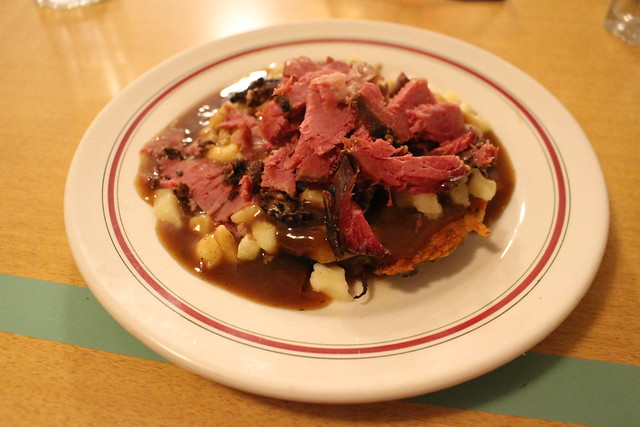 What Sokołów does have is a rare example of cultural fusion cuisine that actually works: the smoked-meat latke poutine. French Canadians and Jews lived in parallel universes in Montreal, despite–or rather perhaps because of–similar defensive minority cultures rooted in cultural narratives of oppression. Despite this, there are so many things about their respective comfort foods that are compatible. The combination of smoked-meat, potato latkes, cheese curds, and gravy brings this fundamental compatibility to light to create what should become a new Montreal staple. Why hasn’t anyone thought of this before? I’d go back for another one right now, but I remember how it took the kitchen a mind-boggling 50 minutes to prepare the dish.

Verdict: The combination of ingredients on this plate is pure game-changing deliciousness. This is worth a try, but only if you’re prepared to wait an absurd amount of time to get your food.